Research Objectives
The aim of the study was to obtain preliminary results on the impact of different transport modes on carbon dioxide emissions.

The test series consisted of the delivery of a light package with flight by drone and driving with a variety of land vehicles. The study included flights with several different quadcopter drones.

The Compared Drones and Vehicles
The test series is shown in Table 1. The duration of the drone test flights were recorded, and power consumptions were measured afterwards from the batteries. The flights were flown at the Pyhtää Airport.

The same distance was also driven by a car and an ATV (All-Terrain Vehicle), and travel time and fuel consumption were recorded. From these initial values, energy consumption and emissions were calculated for the comparison between air and land transports.

Test Places
The land route was on a dirt road in rough terrain located at Ruokosuo in Hamina. The test flights were flown at Pyhtää airport (Redstone AERO Oy).

The length of the flight and land route was 2.0 km. The flight route included round-trip flights so that the visual range limit of 500 m was not exceeded during the flights.

Results
The values used for calculation of CO2 emissions per kilometer from fossil diesel was 2660 g CO2/l and 2335 g CO2/l for fossil petrol [1]. The CO2 emission of electricity consumption was calculated as 158 kg CO2/MWh (5-year average of Finnish electricity production, Motiva [2]).

Based on the results (Table 1) the emissions of the car and ATV were significantly higher than those of the drones. The weight of the drone increases the energy consumption and causes more emissions (Figure 1).

Table 1. CO2 emissions of the quadcopter drones and vehicles 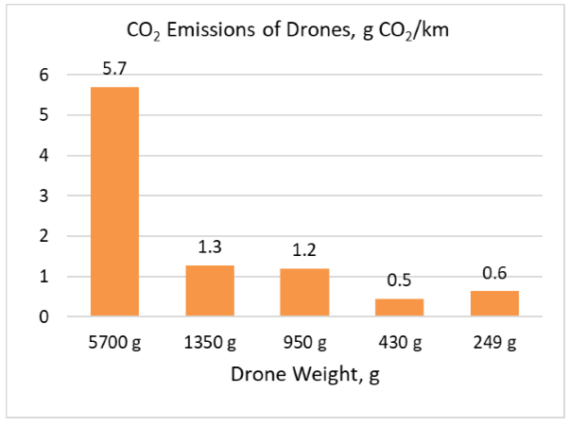 Figure 1. CO2 emissions of the drones

Conclusions
This preliminary test showed that different transport modes have an impact on carbon dioxide emissions. In general, the drones had significantly lower emissions. The size of the drone increases emissions, so the drone size might be a factor when designing low-emission drone services on a larger scale. As a limitation, all the drones in this study were quadcopters. Therefore, these experiments should be repeated with different types of drones. 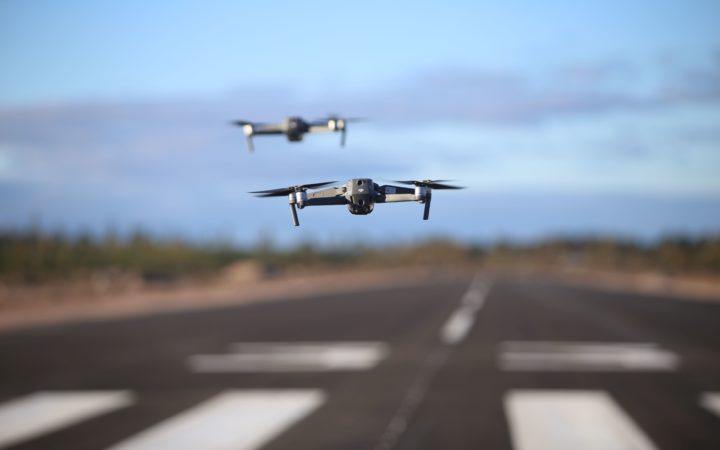