Covid pandemic has been challenging for families with children. According to research if care duties were divided more evenly between men and women it would increase the total income for the family and fulfill better professional wishes of both parents.

The Spanish partner of Time4Help project, Action Against Hunger, prepared a webinar on how care responsibilities affect women´s working lives. In Spain almost a third of women participating in Action Against Hunger activities feel that pandemic has limited their job opportunities.

Leticia López who has managed numerous projects in the third sector and has now worked for four years with immigrant women stated in her presentation that even if women have managed to get work they have been paid less than men.

“According to International Labour Organization ILO the highly feminized sectors such as caring for people, tourism, customer service and retail have been directly affected by the pandemic. In the same time the amount of working hours has been reduced”, she says.

It has also been clear that women have started far less start up companies than men.

“The amount of informal employment has increased. For example, in Basque country eight of ten people who work caring for the elderly in nursing homes are women and their salaries are not high. In addition, they care for their families which does not leave them time or energy for starting companies.”

She feels that there is now need for a cultural change.

“There is now a crisis of care.” We need to make both men and women see the benefits of co-responsibility in the society and families. Change is needed in social structures, organisations, companies and it is not something that can be done by individuals only.”

Masculinity can be a risk factor

Bakea Alonso from Cepaim Foundation has been working for the past 3-4 years for NEO project with topics related to co-responsibility and masculinity. According to her experiences women continue to see their opportunities limited if their male partners are not co-responsible for the tasks related to care.

“In order to change the current situation it is essential to also work with men. Interventions directed only at women have long been insufficient for the objective of equality. European-level policies promote gender equality in labour market but gender inequality is a relational matter. Work with women has to be accompanied by work with men.”

She emphasized that masculinity is a social and cultural construction. In the 1990s the terms like pro-feminist men, new masculinities and reflective masculinities were introduced.

“Gender is not a synonym for women. Men have also gender. In addition, both men and women can change. In fact, many men are now in a box that determines their behaviour about how to be a man.”

In global context, the role of men and boys was addressed by UN World Summit on Social Development in Cairo and at Platform for Action in Beijing in 1995 in order to encourage men to participate fully in all actions towards gender equality. This work continued during Finland´s EU Presidency in 2006 and European Union has emphasized these issues in its roadmaps and strategies for gender equality for 2006-2025.

“Naming men as driving forces and target groups in gender equality policies is a first important step. Including men´s perspectives in gender equality discourses and structures is quite limited. Gender stereotypes and patriarchy can also affect negatively men and boys. Masculinity can be seen as a risk factor because men have, for example, more drug problems, end in prison more often and get into accidents more often than women. Action is needed to support men to improve the role of women.” 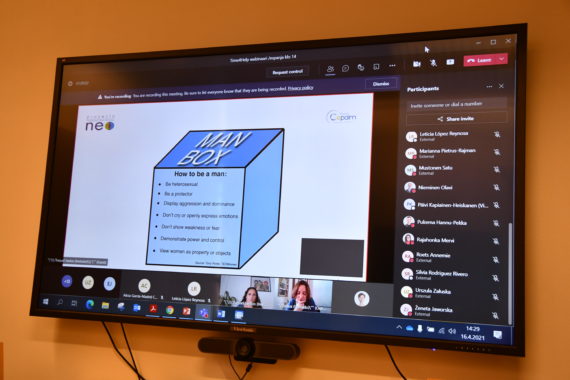 Raquel Santos currently works for Cepaim Foundation with projects related to equality and non-discrimination. She wants to remind that women get also most of the mental burden of care work. This means that they are responsible mostly for the social reproduction (care) and sustainability of lives in their households and the community.

“Women consider mental and emotional tasks as their responsibility. This mental and emotional care work is mostly invisible. Mental care work becomes a burden especially when important changes occur in the family unit, for example, when there is migration process going on, unemployment, income losses, Covid-19 and similar going on. These cause obstacles for women to find and keep work in the labour market. However, men take over more care work and responsibility when women are not present. Also when men talk about mental work, they tend to talk more about self-care.”

NEO project has summarized tips for organisations for creating equality strategies. It has also developed models for organising workshops for unemployed men. The long-term aim is to prepare a guideline for masculinities and unemployment based on research and make a short documentary film about the topic.

Time4Help Project content manager Beata Pachnowska from Dobre Kadry, Poland, commented the presentations and presented a report describing the Time4Help model of support for mature women in the context of research results.

The Finnish partner, Xamk, will prepare the next Time4Help webinar after summer. In addition, the Finnish partner is facilitating webinars in Finnish. In late April the topic of the webinar in Finnish was how to cope in modern working life and share one´s time in a wise way.

The webinar was a part of the Time4Help Finland: Service Business, Women Entrepreneurs and Leaders project which is implemented by Xamk and co-financed by the European Social Fund and the South Savo Centre for Economic Development, Transport and the Environment. The Time4Help project is implemented in an international collaboration with Dobre Kadry, Fundación Acción Contra El Hambre and Odisee University College.