The need to improve the response preparedness for marine oil spills led to the establishment of an oil spill response testing and training facility. The facility is situated in the City of Kotka in Kymenlaakso region and is managed by the South-Eastern Finland University of Applied Sciences (Xamk). The facility comprises of a major test basin and smaller test tanks that enable the use of a variety of test oils in a controlled environment.

High vessel traffic density in the Gulf of Finland in the Baltic Sea poses a risk for a marine oil spill incident. Due to the sensitiveness of the environment, a potential oil spill would be detrimental. This necessitates a high-level preparedness and capability to response to marine oil spills, which typically requires competence to utilize multiple response methods with variable conditions at the spill site. The selection of the most optimal oil spill response option (or options) requires consideration of the weathering processes, of the oil type concerned, and how that influences the applicability of the response equipment. The new oil spill response testing and training facility will now provide a possibility to gain this understanding by testing the performance of the equipment with various oil types. Training or testing the equipment with actual oil has previously not been possible in this scale in Finland.

The oil spill response facility comprises of a major test basin and smaller test tanks. The main test basin is a concrete structured and cylindrical with a diameter of 29 metres (area 660 square metres) and has a water depth of 3 metres. The basin enables the testing of full-scale on-water containment and recovery equipment. The basin also contains a modelled shoreline level for testing on-shore clean-up techniques. The smaller test tanks are made of steel with capacities varying from 4 to 12 cubic metres. The test tanks are feasible especially for oil types or compounds, the behaviour and fate of which are not known.

The test facility enables training, testing and developing new response technologies and techniques in order to achieve better preparedness for oil spill incidents. Training in a near authentic setting will improve the abilities and competencies of the responders. Both of these contribute to the welfare of the Baltic Sea and its coastal inhabitants.

The main test basin is converted from a decommissioned sewage aeration basin owned by water company Kymen Vesi Oy. As the reuse of existing infrastructure has environmental value in itself, the basin also promotes environmental protection and sustainable development through its new role.

The test basin is implemented in collaboration with higher education institutions, governmental and regional oil spill response authorities, agencies, and public and private companies. The development work is carried out in the form of a project funded by the European Regional Development Fund (ERDF) through the Regional Council of Kymenlaakso. Other financiers include the Kymenlaakso Fire and Rescue Service, The Finnish Maritime Foundation and Xamk. The basin belongs to the water company Kymen Vesi Oy and without their contribution the project would not have been possible. 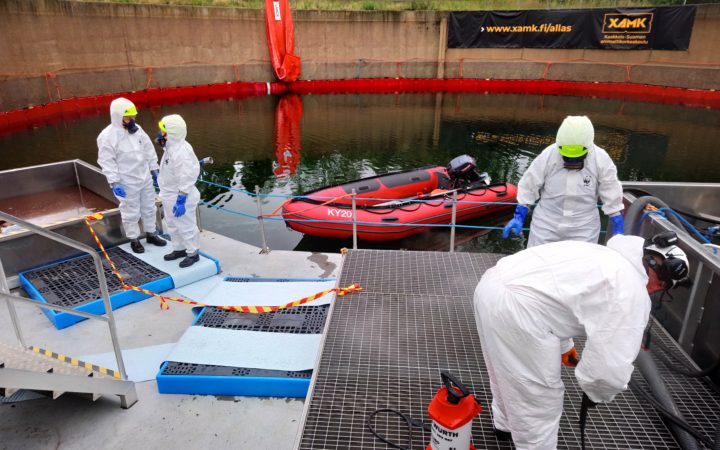